While artists indicate that they have an urge to express their emotions, I believe that emotion that overflows them is already expressed. My view suggests a duality between the experienced emotion, and the additional urge to express it somehow. The artist has already ‘created’ the emotional intensity, so to speak, and the remaining part in the creative process is to externalise the emotion by turning it into colours, shapes, or words. The urge to create refers to an urge to transform the already contained emotion into meanings. Artists do not have an urge to feel, but rather an urge to express – to transform feelings to something else. I see this artistic urge to create as a tool to manifest emotions into a communicative language.

According to the Media and Communications professor David Gauntlett (2004), art is expressive, and less descriptive. In that respect, the urge to create is an urge to express, not to create language that will describe something. Kapoor (Richards, 2004: 215) asserts: ‘I have nothing to say as an artist,’ and while he (Bickers & Wilson, 2007: 334) agrees that artists are putting together a vocabulary of form and colours, he (Kapoor, Bhabha & Tazzi, 1998: 11) does not believe that this vocabulary is meant for the purpose of saying something:

‘My role as an artist is to bring expression, but not to be expressive, [not] to say something. I got nothing in particular to say, no messages. But I bring expression [and] means that allow others to work with.’

The urge to create is given the function of producing a ‘vacant’ language, a tool of forms and shapes that could be used by the viewer to apply their own expressions. As painter Cecil Collins (1981: 1) defines it, ‘All art brings a message into the world. The message of life itself’.

Sol LeWitt’s 1960s Conceptual works can illustrate this idea. In his Wall Drawing #1136 (2004; fig. 18), the painting is drawn directly on the galley’s walls, from floor to ceiling, and not on a canvas. In this way I see LeWitt’s work as suggesting a new way of looking at the creative flow: not as confined to aesthetic forms, such as a painting to be hung on walls, but rather as part of the environment and life itself, which merely needs recognition. The walls become part of the artwork, not a place to hang artworks, in a way that suggests that reality is part of people’s life, not a ‘place’ in which people ‘need’ to live. 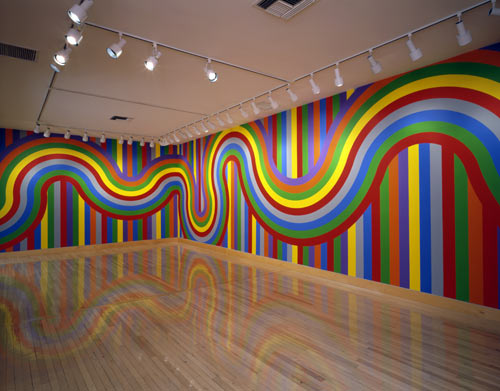 Since emotions are already present within the artists, the need for a release is not a need to realise or express the emotion, but rather to create tools for others to become expressive in themselves. This is why Kapoor ‘…got nothing in particular to say’. His emotions already speak to him at all times, and Kapoor’s only contribution is to create tools for others to be expressive.

In a way, artists deflate from their natural state into a lower state, where they retain a memory of their emotions, and seek to provide others with tools by which others may also come to learn their natural place in life.

This conclusion can illustrate why many authors consider artists as social educators. Art historian Patricia Bickers (

para. 10) explains how artists bring creative tools: by providing ‘…a vital discursive space where the unthinkable can be thought and expressed’. Likewise, Dr. Iain Biggs (

para. 27) sees art ‘…as a mediation between the known and the not known’.

Kandinsky (1972: 29) agrees that ‘The voice of the spirit is heard by the artist,’ but he believes that by hearing that voice that ‘Artists obey Socrates’ advice: Know Thyself’ (p. 39). For Kandinsky the making of art is an act of learning about oneself, where the artist keeps exploring himself or herself. I would argue that while artists follow a process of deflation, that the creative urge and the making of art keep reminding the artists who they truly are. Self-exploration acts as a tool to remind artists not to forget their higher state whilst they are in the lower state.