It follows that the sound of one’s own voice may be presented to one by someone else altogether, as I have noted in one of my dreams. Just before waking up one morning, I heard someone calling up my name in my own voice. The calling came from outside of me, as if someone was standing in front of me and calling me, yet it was in my own voice, and so it felt as if that someone was at the same time myself. Dreams seem to allow one to experience what Jung (1963: 45) calls ‘two different persons,’ which inspired one of the images in my photography, poetry and graphic design project Petals of Trust (2007) (fig.87). The most important ‘feedback’ I received on this project was that it was exhibited in Southampton and was bought by a visitor to the exhibition. 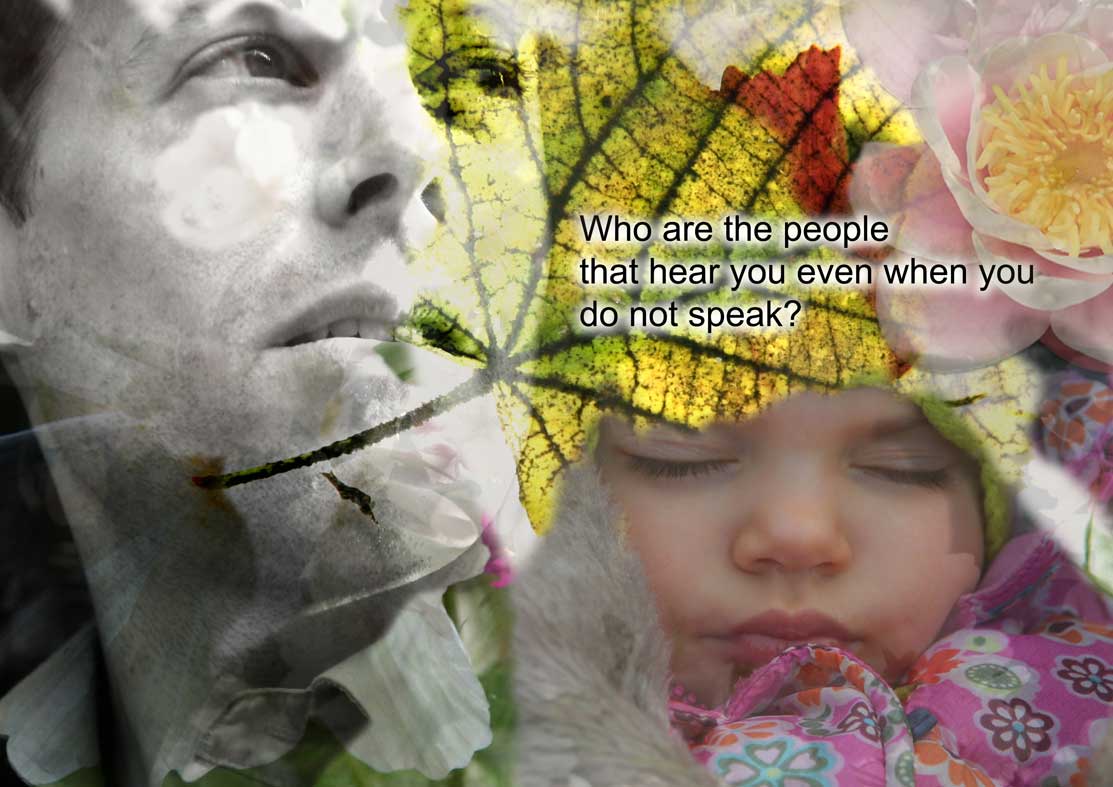 Artistic experiences of being inspired through words come to artists through different sounds – male, female – which feel as if they are separated from the person, and not created by himself or herself. Wilmer (

para. 42) reminds us that while words are carried out through sounds, that the sound of words ‘…is independent of what they signify’. Sound seems to have a different layer to the words that they carry. Wilmer continues, ‘Of course the sound tends to get associated… with the significance. Nevertheless, the sound is independent.’

In that respect I consider sound as a primal form of expression that is expressed before words or image are realised. Sounds have a direct resonance to emotions, with high sounds corresponding to happy emotions, and low sounds usually corresponding to sad emotions. In the same way that one can feel pressure through touch, one feels emotion through sound. Sound in that respect is the language of the senses which is experienced instead of being read in a written form. It creates events as they are felt rather than perceived logically. Jenkins exemplifies this argument in regards to his inner hearing of sounds and his chanting. He (

‘…the reason I cannot fully express what I hear is because there is even a higher sound than the one I hear. The original sound is still in a process; it is still being produced. Far from it being a one-off sound that is just created, it is a sound in progress, and it is the creating of everything else out of it. A kind of a source from which sounds are created. And it has not yet been finished being ‘sounded’, so it’s hard to fully re-produce it in chanting.’

I have experimented with the differences that sounds can have on audiences, throughout my films, incorporating different tonalities to express different modes. In Quantum Words (2006;

) I have incorporated sounds of sea waves, chanting in Hebrew and sounds that represent movements of lights. I have also included subtle singings, which were recorded very close to the microphone. For Confessions of an Angel (2008;

) I have recorded the whole narration in an almost whispering sound, again, very close to the microphone, giving the feeling of something ‘very intimate’ and a ‘brevity of the piece,’ to quote from two separate feedback (

). In that way, sound can be seen as an essence that does not only move in space, but rather creates spaces. Intimate sounds seem to provide viewers with a feeling that someone is very near, as if the space of the room, in which they watch the film, becomes smaller. The inner space is altered, becoming flexible in that way.