Prior to the start of this research, in February 2006, I had two distinct modes of thought. One involved being a creative artist myself, and the other was writing up a PhD proposal (Symbols of Feelings, published December 2006;

). These two states of mind did not coincide. However, as my research progressed I gradually learned to combine the two, allowing practice and theory to feed into each other. During the first few months of this research I had already created a few artworks, and presented my paper at a number of conferences and events (

actions table). This yielded valuable feedback from audiences in the early stages of the research, referring both to my theoretical ideas and to the artworks, which were presented as part of the papers. As a natural matter I have adopted the phenomenological approach of using the researcher himself as an agent (instead of using structures). The marriage of practice with theory led to a point where practice generated theory, and theory created meanings and explained practice. Since the phenomenological approach gives equal weight to practice and theory, the two could ‘speak to each other’, allowing me to give them equal attention, thereby observing the influence of one on the other. Theory was viewed as a part of the process of making art, and art produced experiences and results that enriched theory. This was especially noticeable in the concluding art experiment for this research (see chapter 14).

In the first stages of the research I attempted to examine artistic experiences via a deductive approach, trying to generate theory based on theory. I looked at Kant’s ([1781] 1964) a-priori knowledge, Descartes’ ([1630–1701] 1972) notion of epistemology based on the act of thinking (rather than on the act of feeling), and Einstein’s (1962) explanations of the fluidity and relativity of experiences of time and space. These theories, together with quantum physics, did prove valuable for this research, although not in a way that I had expected. I was unable to deduce from these theories a conclusion relating to the activity of artistic inspiration. However, I was able to conclude through these theories that there exist possibilities for unseen capacities that transcend our normal perceptions. The deductive approach through scientific theories, together with my discussions with scientists and via attending scientific conferences, did not say much about artistic creativity. Instead, an inductive approach, which allows for intensive and in–depth research, was chosen.

Edward de Bono, in his book Parallel Thinking ([1994] 1995), developed a useful method for induction research. de Bono does not just assert a system, but also scans the current system in use. He explains that the current mode of thinking, which he calls traditional thinking, uses judgement (yes/no, right/wrong, true/false) as a tool to eliminate some information and thus arrive at one conclusion. de Bono suggests an alternative method, parallel thinking, which embraces both sides of contradictions and seeks to design a way forward (see diagram 1). In that way, de Bono ([1994] 1995: 57) argues, we can design and create through possibilities, rather than take ideas apart through analysis and logic. This approach was used in my research through an interdisciplinary literature review, consisting mainly of art studies, with references to psychology, philosophy, and science, for the purpose of designing conclusions gained from a method of parallel embracement. The research also saw an interdisciplinary approach by being a practitioner in many fields of art, ranging from making poetry, films, graphic design, installations, and art workshops.

I have also interviewed artists across a few sectors of the arts – poets, painters, installation artists, chanting artists, authors, critics, and academics. 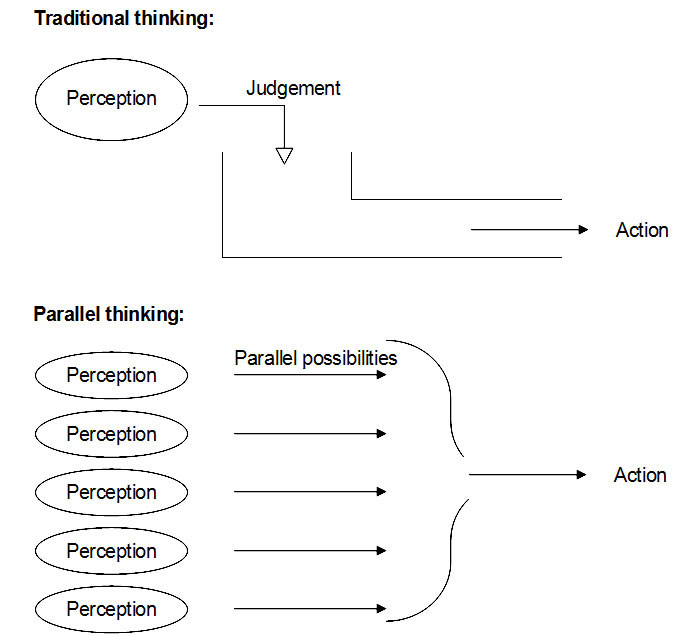 Phenomenology (as discussed by Denscombe, 2003) proved suitable for gaining in-depth access to the processes of creativity in art since it advocates that research focuses on describing things, on how things are, rather than trying to explain them as they happen. In order to understand inspiration, a thing which is sensed intuitively but not known, the researcher needs to learn to observe, accept and describe, rather than try to explain. This approach proved useful to me when I was receiving feedback about my presentations and artworks, as well as when conducting interviews. The first experiment in being ‘open’ to receiving challenging information produced data derived through artistic meditation which was later made into a short film, Interview with authorial-Self (2006/2007;

). The data was surprising to me as much as it was to those who watched the film (as evident in their feedback), and yet it was not filtered by me but was brought forth as it is (see also revised transcript version of the interview, 2008;

Phenomenology suggests that the researcher should examine events through experiences, and not through predefined theories. Knowledge gained by the senses, and not deduced in the mind, can give clues to such elusive events as the process of capturing inspiration in art activity, since artists describe this process as emotional rather than logical. For example, the poet Anne Stevenson in an interview for this research (

para. 9) argues for ‘connections between you… and your experience, and your feelings… and words… that no analytical psychologist can explain’.

Poetry is defined by Robin Skelton (1978: 35), in his classic work Poetic Truth, as an activity that comes to express an experience, not an activity that tries to define or explain. While phenomenology looks at experiences and emotions, it also focuses on the study of the everyday world experience; the study of activities and events which are relevant to the participant in the research, as opposed to other approaches that generalise a theory about events that are remote from the participants. Hence my understanding that the phenomenological approach is suitable for research that focuses on inspiration and yet draws conclusions from ‘down to earth’ events and experiences that matter to participants. This is most important if the research is to advance our knowledge in the study of creative experiences. Otherwise, as my first supervisor challenged me before he accepted this research, I could simply engage in art practice alone outside academia, where I could do and say whatever pleased my creative urge, but which would not give us systematic tools to help us understand creativity.