As participants were arriving they all apologised for ‘not being creative’, and suggested that they ‘do not engage much in writing and definitely cannot draw’.

The event started with a short introduction of its purpose, placing it in the context of my PhD research. I presented some formal theories regarding the processes of creativity and the role of inspiration in art making. I then remained in a ‘formal mode’ and discussed my experience of being inspired to create this workshop by an angel:

‘A few days ago I was speaking to my Angel… we had a lovely chat me and my Angel, we were sitting in my room… we had coffee. [And] he told me, ‘You shall make a workshop. You shall invite people, and you shall make an experiment’. An experiment in which we will all draw into our own, what we call, sources of creativity. We will draw inside… through simple steps that I will guide you, and we will see which gifts lie within, because it is not only the ‘external’ where we all meet; it is also the ‘internal’ where we all meet’ (from The Collective Hearts, 2008)

Participant’s facial expressions in response to this ‘formal’ description of communication with an angel indicated that they perceived this as humorous (see fig. 103). Using humour and still being serious regarding what I say, have managed to demonstrate that I am myself open to inner sources of inspiration, without the need to ‘prove’ my opinion to others through a serious argument. The participants’ response to this shows that humour can allow the facilitator to say what he or her experienced and want to communicate, while letting participants to decide if they accept the message or not – without the need to reject anything which may sound different or surprising. 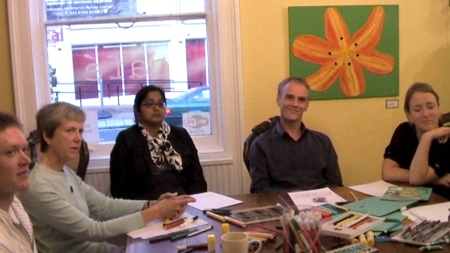 Bachelard discusses the notion of drawing inward in the context of daily life. He (1969) discusses the intimate corners of the house, as places where people like to curl up and reflect. He sees these intimate corners as symbols to our inner space, which he describes best by using an analogy made by Jung. Jung described the psyche as a building, where the upper story might have been built in the 19th century, and the ground floor in the 16th century. The entrance hall, Jung explains, is reconstructed from the 11th century, and in the cellar we can find Roman foundation walls. Under the cellar there are filled-in caves. Jung sees this image as an analogy to our mental structure, and raises an important point in people’s behaviour. He says that people can hear a noise in the cellar of this house, and hurry to the attic. Once they find no burglars there, they say the noise was pure imagination. Jung suggests instead a method to examine the cellars, and even go further to see on what the cellar stands on, the filled-in caves.

This ‘psyche house’ was a method used by Jung with his clients. Jung would guide his clients to close their eyes, and imagine a downwards-facing staircase. Patients would then imagine going down this staircase and into their inner mental ‘cellars’. Recently, this method was made popular by the author and facilitator Branon Bays (1999), who named it The Journey.

Bays (1999) developed her method following a diagnosis in which she was found to have a football size cancer tumour in her stomach. The doctors had told her that she must be hospitalised immediately and that she had one month to live. Bays refused to accept that direction, saying that there must be another way in which to recover, and asserting that she had a knowing that she would heal. The doctor pointed to her large book library assuring her that there is not even a hint of evidence of someone in her condition being cured. As Bays declined hospitalisation and left the hospital she had a peak-experience where her vision intensified and images became clearer to her, holding a message, or a ‘knowing’, in which she knew that she would heal.

Bays entered strict diets in the following months and meditations where she would visualise going down an imagined staircase to the core of what she saw as the reason for her illness. Bays’s process resulted in a full recovery, and in systemising this method to be used by all people as a way of self empowering.