The notion of inner spaces within the body was explored in a different project that I have created, Waterised Words (2007). For this installation I poured Evian drinking water into three kitchen bowls. Under each bowl I had printed one of the following words: Love, Calmness, or Fear, which could be read by looking into the bowl (fig. 90). I also included the same words on the installation table (fig. 91), and then invited the audience to drink the water with their ‘embedded’ words and to tell me the ‘taste’ of the words (figs. 92-95). 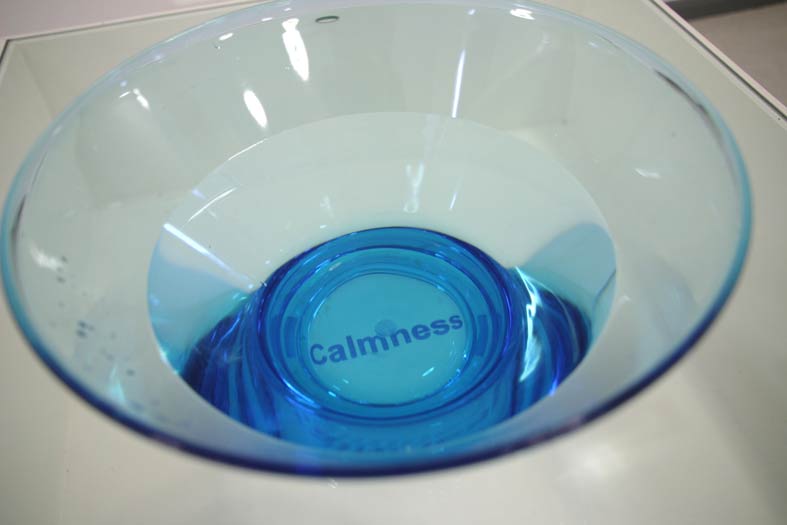 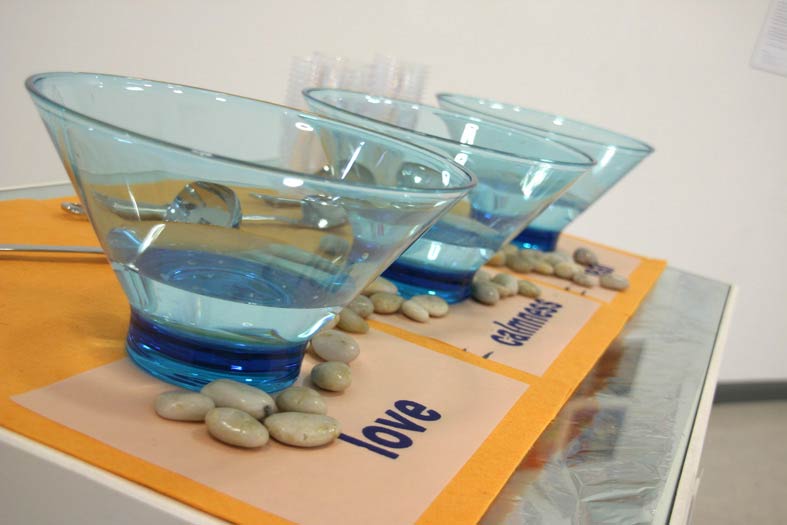 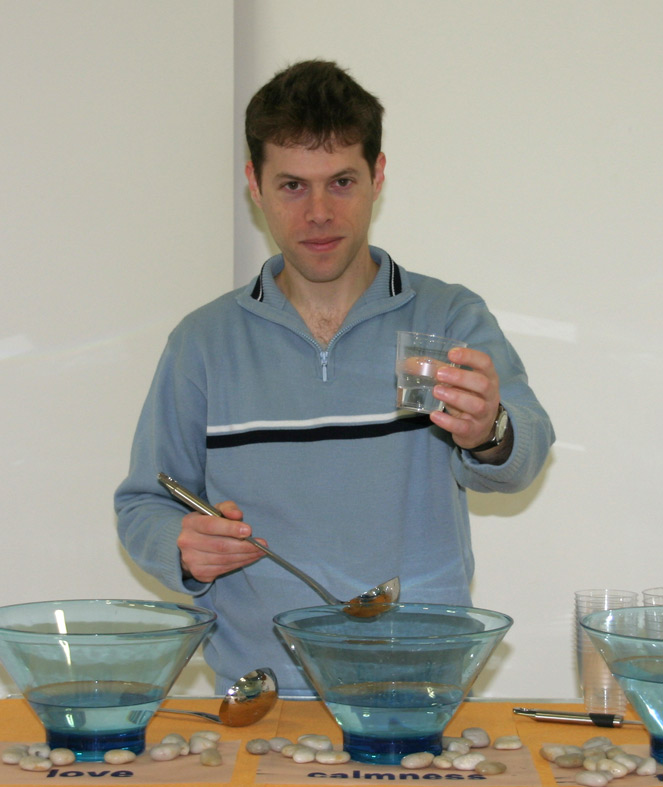 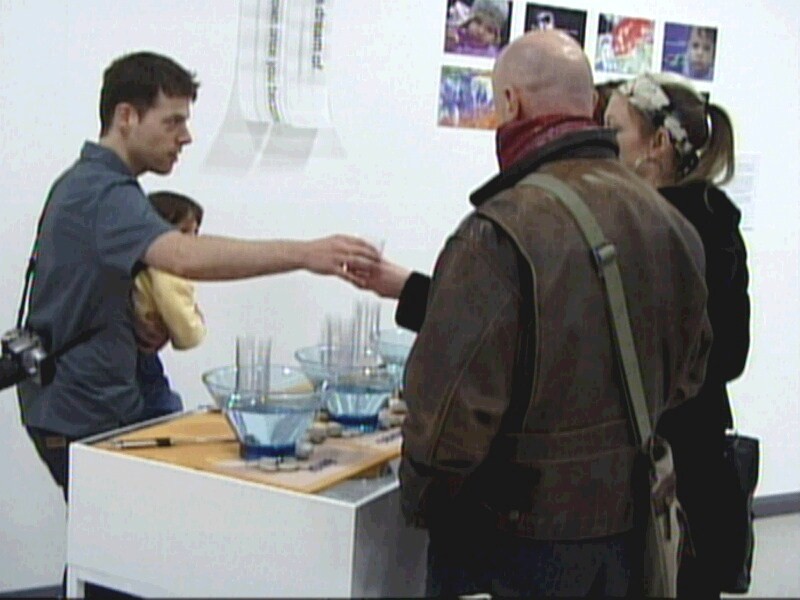 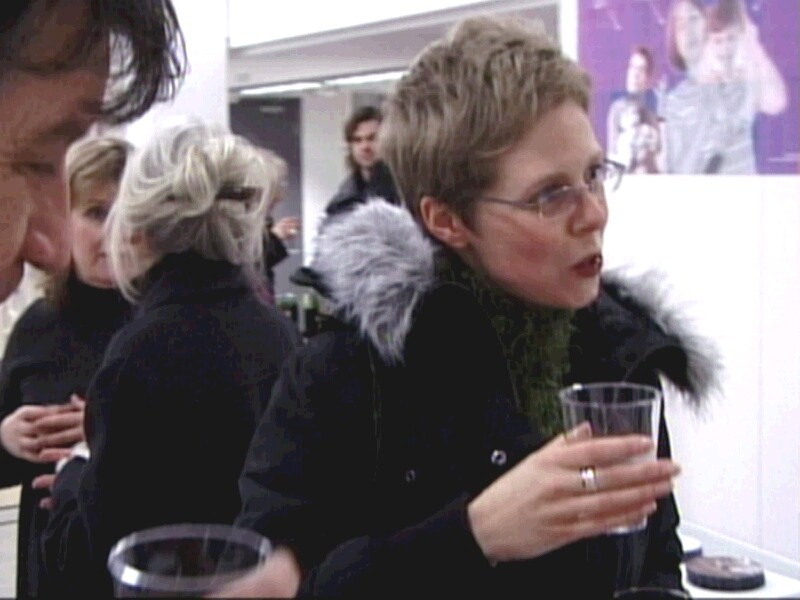 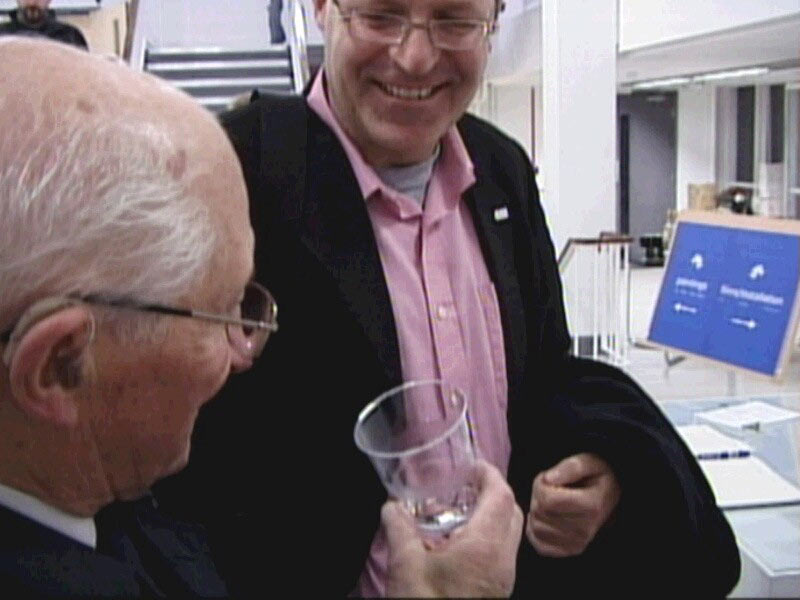 I chose the words love and fear based on Walsch’s notion that these two are opposites. Walsch (1997: 24) asserts that the opposite of love is not hate, but rather fear. To this I added a third word, calmness, which I considered to have an intermediate value between the other two. In that way I expressed the full spectrum of human emotion, using three words.

The audience were advised that the water is plain Evian drinking water, and there is no ‘trick’ involved intended to fool them. I tested the water in front of the audience to demonstrate this. The purpose of this work was to see how people would respond to the notion of ‘drinking words’; of taking words in, instead of the normal forms of communication where people speak words, i.e. taking words out. In that way I explored what happens to words whilst they are ‘inside’.

I was also attempting to see how can we relate to the ‘obvious’ tools of communication, words in this case, in a challenging way that will tell us something new about ourselves. The idea of attaching a taste to words was meant to leave a physical sensation with the audience, a sensual memory to words, instead of only an intellectual one.

Water was in the bowls in a way that produced stillness, quietness, as if saying nothing. This was in contrary to the spoken or read word in the bowls, underneath the water, which produced sound. In that way I was trying to remove the sound of words, as if to absorb the word’s sound by the water, and focus instead on the sense impression that the experiment produced. Water is a symbol for sustainability as the human body must have water to survive. Words placed within water give the impression of being crucial to one’s existence.

People’s responses were mainly of amusement, with some reporting actually experiencing a different taste to the various waters (although all the water came from the same bottle):

* [tries Fear]: ‘There is an element of earthiness about it’.

*  [first tries Calmness then tries Fear]: ‘No difference… but I felt calm as I was drinking the Calmness water…’

*  ‘Very different taste to all of them. I noticed that the one cancels the taste of the other.’

*  ‘I know what Fear tastes like… and I know what Love tastes like… Give me some Calmness…’ [tries Calmness]: ‘Flavourless… Quite flavourless. See, I think Calmness is less salty than Fear. It is softer, as if there is round edges on the molecules, as oppose to spiky edges.’

*  ‘I find from all this that words are much bigger; they have deeper meanings. Even if one word is a word it has a few meanings to it.’

The purpose of this project was not to gain evidence of ‘deep’ psychological influences, but rather to challenge people, raise questions, and most importantly to give people a tool to better understand themselves. After this project I was approached by a reader from the Psychology school, suggesting we collaborate on a new project where we could test people’s responses through a test group and a questionnaire that he offered to design. While I did like his suggestion, we did not collaborate in the end since my attempt was to indicate, challenge, inspire, and provide tools – and not to test people. I was happy with the challenging element that my work achieved. However, I would love to remake this installation on a larger scale, based on the skills I have gained since to reach more people.

With this work I have represented the notion of an inner voice, which artists report as being so crucial for guiding their creative impulse. My ‘job’ was to visualise this inner voice, through words, forms and colours, and still be reminded that it is an inner one.