However, feelings may not be evident all the time, and thus difficult to evidence on inspiration. In The act of creation Arthur Koestler (1964: 148) quotes Plotinus (ca. AD 204–270) who argued that feelings can be present without an awareness of them. It seems that some forms of feelings, from which sources of inspiration may come, are felt by the artist but cannot be evidenced for in the literature, while some other feelings can be evidenced for. More so, the poet and critic Kathleen Raine (1975: 120) suggests that those feelings, once felt, seem familiar, as if they were a normal part of the artist’s psyche. The poet TS Eliot provides an example in one line from his poem Burnt Norton in Four Quartets. Eliot (1970: 16) suggests a meditative mode of experience where one is under ‘concentration without elimination’. Concentration without elimination suggests a state of paying attention without trying to eliminate or filter what one feels. In this way, while the literature may not evidence on the totality of feelings from which the artist derives inspiration, it can relate to those feelings that one is aware of and can make sense of. The poet and critic Archibald MacLeish (1965: 18) explains that the poet actively labours against the meaningless, until he or she forces it into meanings.

The conclusion of the literature at this point brought me to an understanding that artists have moved from depicting external appearances to depicting the means of art itself, and the means by which the artist himself or herself engages in art making. That process led to the exploration of inner sources of inspiration, suggesting that inspiration is accessed through the artists’ strong feelings that are later given meanings which can be communicated.

The process of giving meanings to strong feelings allows artists to make sense of their experiences. Giving meanings to experiences suggests coding experiences into language. Language, according to the philosopher of art Susanne Langer (1982: 65), is a form of logic and thought. Naturally it can be said that using that form the artists can then communicate their experiences to audiences. However, the poet and critic Wallace Stevens (1952: 13) in his essays on reality and imagination, suggests an opposite view. Stevens asserts that poets have a desire within them to actually ‘kill’ language by stripping words of all associations. Artist Anish Kapoor (Bickers & Wilson, 2007: 337) seems to join this feeling, confessing that once he has an idea in his mind he would resist to draw it on paper for a while. Anish asserts that an idea is ‘much more alive’ in his head than on paper. In that respect, I infer that artists may not be said to translate feelings and experiences into meanings for the ultimate purpose of communicating, but rather for the purpose of expressing. Indeed, the literature focuses on the artistic language – colour, shape and line – suggesting that artists translate meanings to these artistic forms. Installation artist and educator Joseph Beuys (Thistlewood, 1995: 57) argues that these forms are the natural place of meanings or ideas. Beuys argues that ideas cannot exist by themselves in the form of verbalised representation, but must be rendered in colour, shapes, pictures and imagination in order to ‘live’. The act of giving meanings by artists to feelings and experiences is the act of expressing ideas, and giving them their natural forms in which they can ‘live’.

Picasso refers to a different importance in the process of inspiration and art making. By asserting that ‘… it is the realisation alone that counts’ and ‘Others talk, I work!’ (de la Souchère, 1960: 13-14), he notes that the most important part in the process of creativity is the actual application of artists’ ideas into the artwork. The work of the contemporary painter Felice Varini indicates a new approach in the way that artistic forms are applied to actual works of art. Felice (Muller, 2004: 43) abandons the canvas as a surface for paintings and instead uses architectonic spaces as canvas. Painting his localised-perspective paintings on buildings, streets and spaces, Felice moves away from such as Pollock, by using reality as the place to create art as well as the canvas for the work (fig. 4). 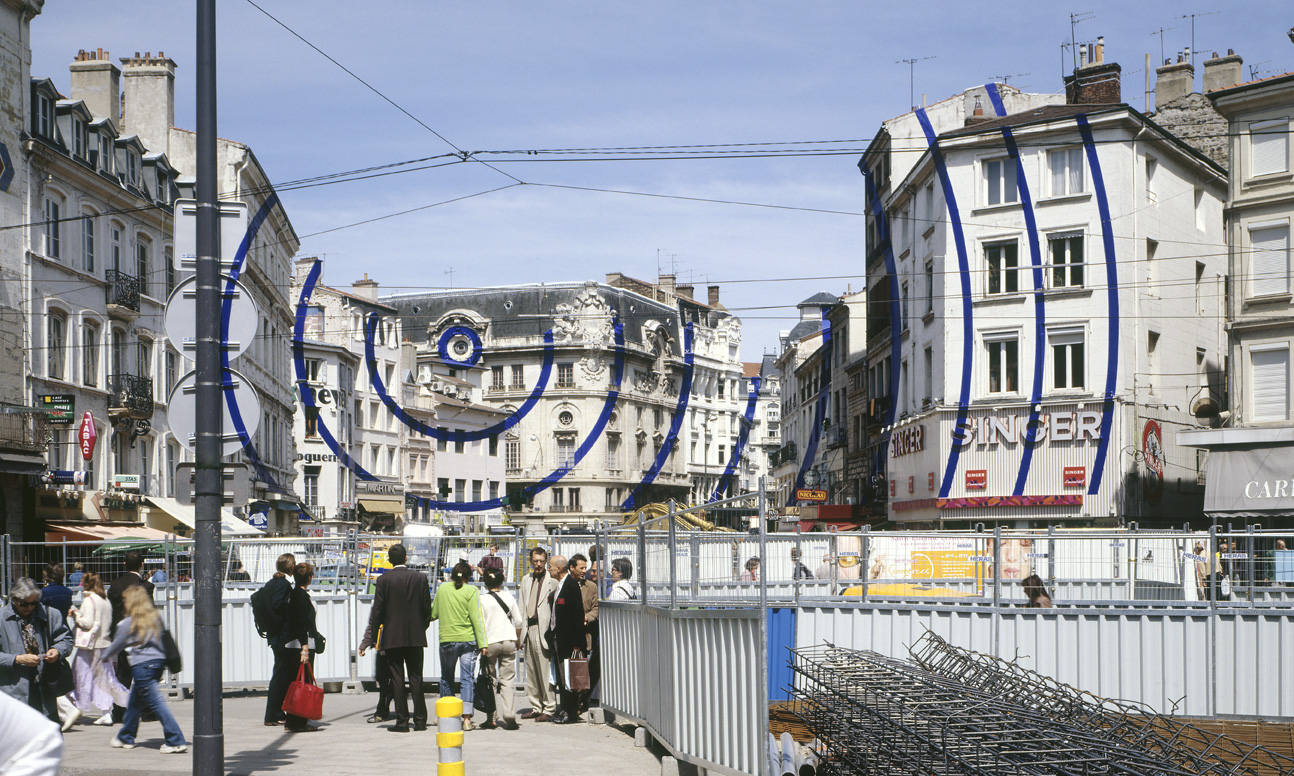 Figure 4: Felice Varini, Between Heaven and Earth (2005, acrylic paint on buildings, street and sign post.) Image © the artist. Permission to use image obtained from the artist.

Works in public spaces, Bal (2001: 3) explains, cannot be seen as individual creation by the artists only, but collaborative creation with the viewers. The inclusion of the viewer in the process of public works of art indicates another interesting implication. According to Blake (Wilson, 2001: 226), the true mode of knowledge comes from experiencing, from the actual making and from participating. In that respect, by putting artistic forms into practice, artists generate frameworks that enable both the artists and the viewer to experience forms of authentic knowledge. The Romantic poet Wordsworth is quoted by the psychologist and education reformer John Dewey (1933: 37) as saying that all our senses are acted upon by the environment: the eye sees, the ear hears and the body feels. Wordsworth’s statement supports the notion of authentic knowledge, which is ‘felt’ and understood through the body, rather than the mind. Wordsworth indicates that at an early age, the whole body of the child is ‘curious’, in a state where curiosity is still removed from thinking.