I have explored the notion of inner space in the film A Fallen Angel (2008;

). For the making of this film I have shared an early experience I had at the age of sixteen. Students from a Playback Theatre took upon themselves to re-enact my story, without any preparation, in front of audiences, as part of the 2nd International Arts in Society Conference, at Kassel University, Germany. By listening to my story and re-enacting it in the room, my inner space felt as if it was internalised within the actors, and then externalised by them in a new form (figs. 88-89). 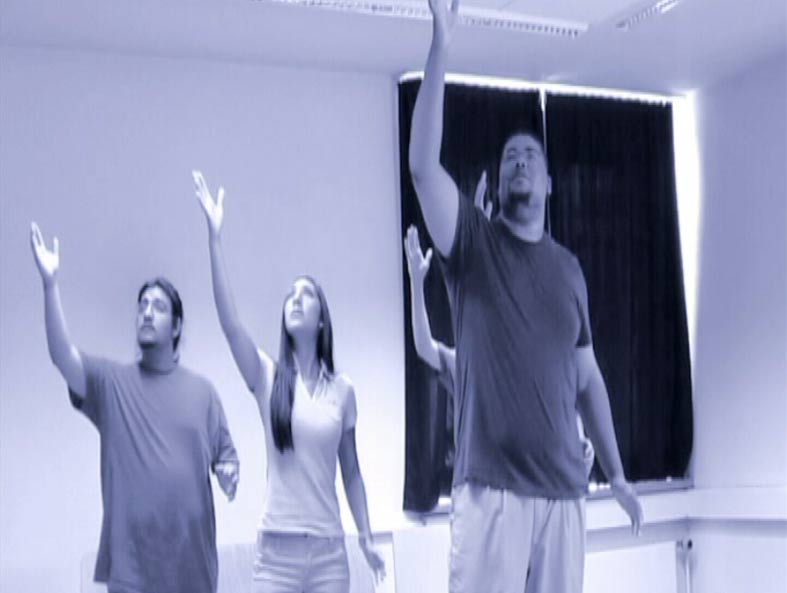 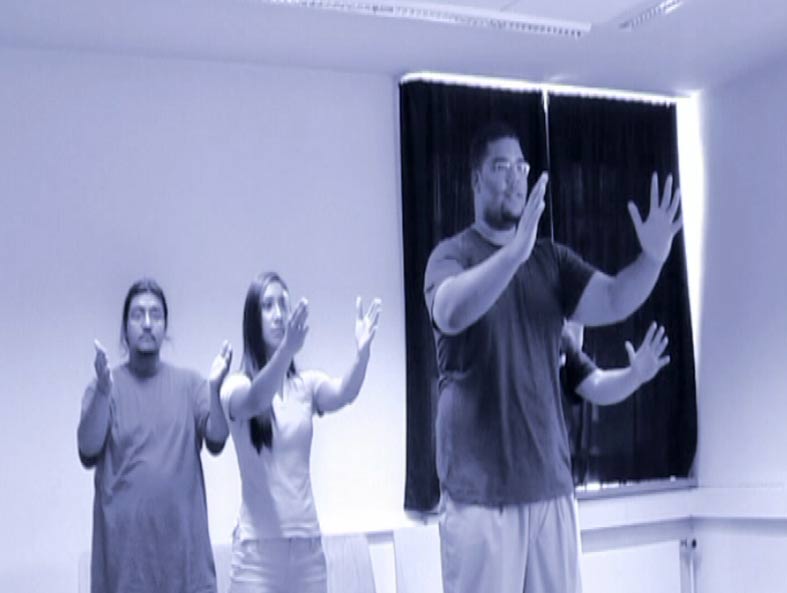 I have told my story using these words:

‘I was walking in one of the religious cities in Israel, I am non religion person, amidst these many Jewish religious… I am not religious at all. And then God told me, ‘Here I am!’ in the middle of the street… when I was sixteen. He told me, ‘Here I am,’ so I looked around me and I could not see him. I asked him, ‘Where are you?’ And he told me, ‘You shall write poetry, that is where I shall be’ (from A Fallen Angel, 2008).

And the group performed it, using these words:

‘You begin life, inside this really dark dark tunnel. You are walking, amidst this crowd of all these people. Until you begin to listen just a little bit. You begin focusing on the small words; small words of a higher power. You try so hard, you try to understand what they tell you. Write, write. But who is talking to me now? You have a kind of a scared chill emotion. This, this power, this being has told you to…
You do exactly what you are told. You do what comes from the heart, and you release what’s inside, on this paper.
So you begin to write, you begin to write, until you have this mountain of… It’s Him! You see that being right in front of you.
I see,
I understand,
And I thank you!’ (from A Fallen Angel, 2008).

In a conversation after the performance (24th August 2007) the group explained that they are not just listening to the words that are spoken, but also to the way in which the person ‘carries’ his or her words:

‘I am listening to your words, but really looking to see if you are nervous a bit, thinking, thrilled? These are characteristics and emotions that you don’t realise that you are expressing. They are involuntary, I think that this is what formulates what we take and perform on the stage.’

The effect that the body has in this work seems stronger than the story itself. The actors are relating to the inner space of the person, and then they perform it using their own bodies. This is evident in the explanation given by the group’s director:

‘It is an instinct thing, which we cannot analyse. Acting techniques… particularly in America, where acting methods are used by spending a lot of time analysing your character, doing your substitution work. [However] here you have to take instant decisions based purely on your senses, on your five senses, and whatever that other sense is. So instant empathy has to happen. With your stories, we then tell our own stories and act them, so we can act freely.’

In this experiment I have told the story of a previous experience, and it could be said that the experience was shifted in time, from the past to my memory and to my body and from there to the actors’ bodies. In a way, this project imitates the spontaneity of What is Love? to the extent that the human body reacts instantaneously. My story, as retold by the actors while they performed it, was an expression of the body’s movement, and not its guide. This can be observed in the film where the movements of the actors seem to lead the words that they say, as if movement comes half a second before their speech does.