At the same time my paper (Dekel, 2008) on the creative process was accepted for publication in a social sciences qualitative research journal, demonstrating that the creative processes followed by art researchers does not contribute to the art field only but also to such studies as those in the social world.

My artworks shifted from focusing on my own personal experiences to observing the experiences of others. I have begun this shift with the installation work Waterised Words (2007) (see overview in chapter 12.2) which focused on asking audiences what is the taste of water that was ’embedded’ within words.

), I have continued to engage people with questions, this time asking people in the middle of the street, ‘What is love?’ and filming their answers into a short film (see overview chapter 12.1). This project felt like an installation in action, where the final art work was created while it was made, with people’s responses shaping the way my action looked, and the way I continued to ask other people, shaping the feeling of the final film. This project drew from my experience by then with interviewing people, where I have learned that surprising questions which are articulated well can open up people to unique responses. Robson (1993: 234) in his study of research methods describes a method in interviewing which he calls ‘probes’. Probes, he explains, are tactics, such as body gestures that can get the interviewees to expand on the answer they gave. I took this tactic to its extreme, using it for getting an initial response from people, and not a second response that aims to expand on the previous one.

By this time my interviews with artists, my paper presentations, and the literature review have shifted from focusing on inner visions and emotions to focusing on the creative process which artists and non-artists seem to follow. My art works moved to become public, not just in the content but also in the context in which they were created. In a way the thesis evolved from the individual to the group, from the inner world of The Prince of Hampshire to the collective world of What is Love?. I also carried out more performances and poetry reading in front of audiences in events that were not directly connected to my research, thus allowing me to expand my work to public audiences (fig. 9). 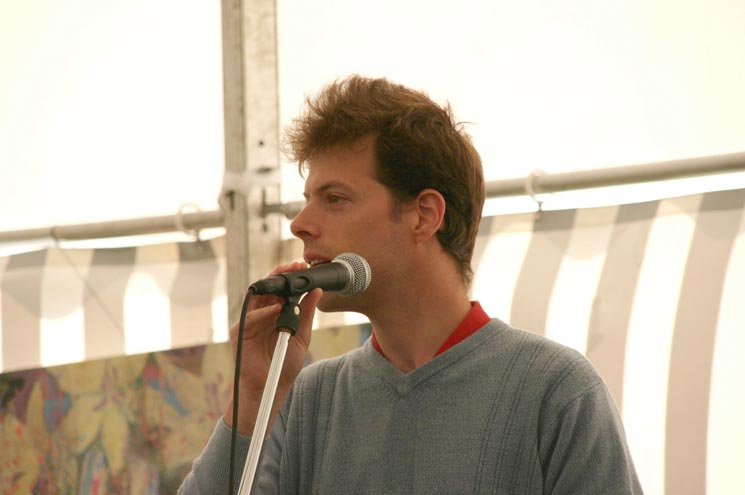 By then I had noted the need to express the creative process in public, and I started to wonder about the methods which might be employed in order to facilitate a better use of creativity by people. The first question I asked in that respect was how artists seem to manifest creativity better than most other people do, the so-called ‘non-artists’. The artists that I interviewed suggested that there is no unique or special capacity to being an artist. Rather, they suggested that they have a ‘normal’ relation with life, and that they live in this world, so to speak, and not in an imagined world which is remote from our reality.

Yet, when I examined that form of relationship with life I noted that my interviewees evidenced a specific quality they all share, the quality to sense, to be sensitive to reality. As Wilmer (

para. 57) suggests, his work has ‘… a duty to what exists, to the nature of reality…’ And Katayoun (

para. 28) suggests that ‘first and foremost it is about having a sense of your environment… allowing the internalisation and processing of those images to influence a work of art’. My interviewees exert a very sensitive approach to life, in which they see things that normal people ignore. The poet Lorca (Gibson, 1989: 23) described this as a ‘…straightforward approach to life; looking and listening’.

With this conclusion I noticed that there is a core theme, ‘sensing’, which comes even before the individual feelings of the artist come to work. I have included the theme ‘sensing’ at the beginning of chapter 10: