With heightened emotions and an urge to create comes a process of acknowledgement, where the artist makes an intuitive response to the creative feelings, through producing inner words and images. I see this as a process which stands both as a creative form in itself, where emotions are transformed into words and images in the mind of the artist, and as a process in which the artist registers emotions that are later transformed into art works. This process is not an intellectual self-analysis, but a form of recognition and registration.

The process of acknowledging will be examined through the categories word and image.

Robin Skelton (1978: 19–20) describes the feelings of identification that children have with the environment around them. Skelton explains that as we grow up we then start to give names to objects, and in that way objects are then treated as if they are independent of ourselves, turning into what he calls an ‘outness’.

By using words to give names, people separate themselves from things and emotions, and then observe them. Observation allows people to examine the relations they have with things and emotions, hereby producing meanings. Abraham Maslow (1994: 89) argues that the use of words has the power of removing inhibition and blocks that prevent people from expressing peak-experiences. He (1994: 90) suggests a method by which people learn to observe their experiences and then to label them, giving them names. Myra Schneider (

para. 24) shares her experiences in which words help to ‘…sort out ideas… crystallising thoughts and emotions… outside you… you can understand it much better. You have partly separated yourself’.

In a performance made into the film The Prince of Hampshire (2006;

) I have partly separated myself by inventing a personality, the Prince of Hampshire (figs. 29-30) who admits being both a prince as well as the PhD researcher, Gil Dekel, myself. The character prince reflects on this, as part of the film, explaining: 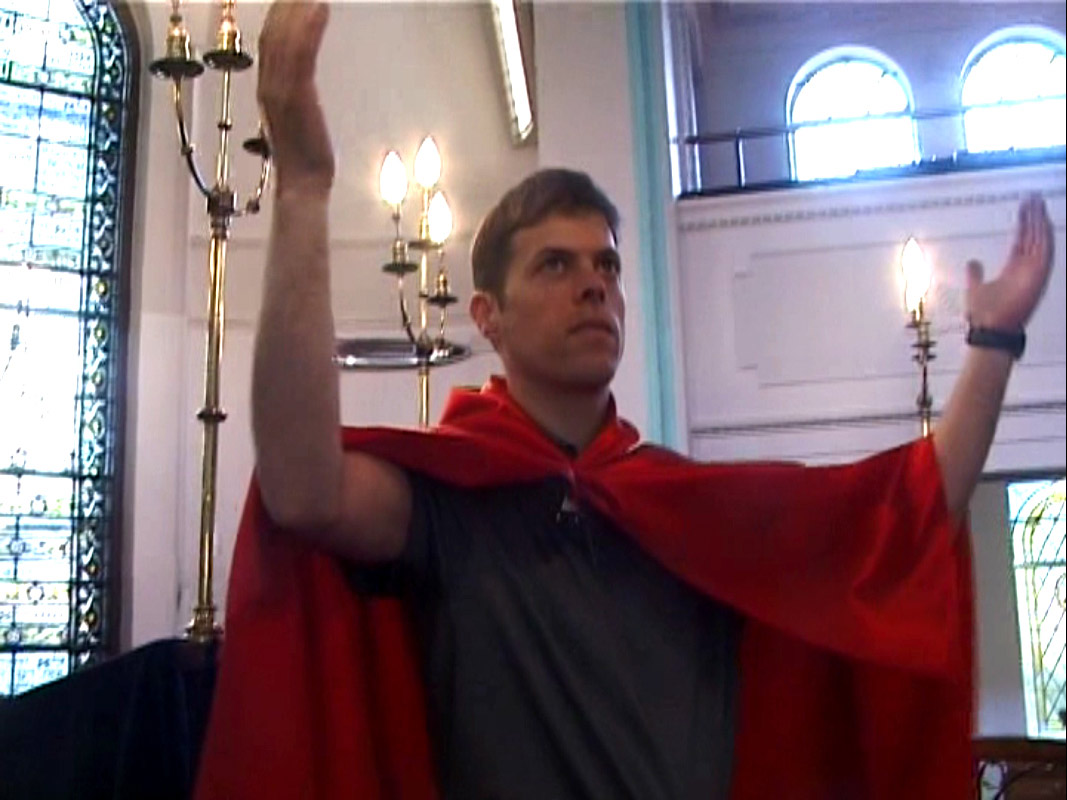 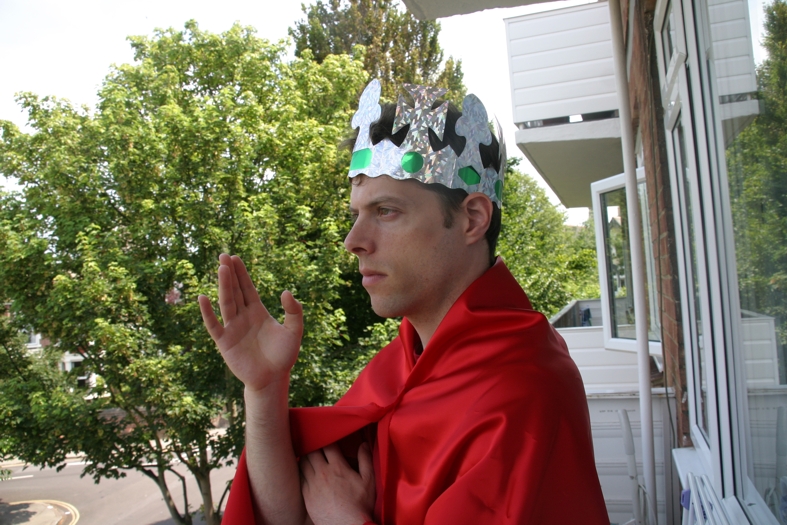 Figure 30: Production image from the film The Prince of Hampshire (2006). Image © Gil Dekel.

As an answer to that question, the character prince asserts in the film that words do not only help us to reflect and understand ourselves better, but rather help us to understand our position in the social and historical context. With the written documents that we have we can know what happened in the past, and we can assess where we are now. The character prince says:

‘It is thanks to the written words that commemorate past kingdoms that you can read about these kingdoms today, and know them… without the written words you will not remember the great achievements of [such as] Napoleon, no matter how much he was successful. It is not the ‘great conquests’; it’s the great writings…’ (minute 2.40).

In that respect words allow people to look at themselves, both by looking inside, making meanings of their feelings, as well as by looking outside at their historical and cultural position, observing the collective social development in which they take part.

I have attempted to give shape to this observation, turning words into an artefact that will serve as a reminder to audiences for the duality of looking inside and outside, and so I have attempted to create a coin that the character prince would give as a free gift together with the DVD of the film. For the observe side of the coin I designed the prince’s figure – representing the historical motif of the emperor’s face on a coin. For the reverse side of the coin I designed the text ‘A Word’ – representing the monetary value in the prince kingdom – words as a currency of exchange, instead of money (see test etching on cooper sheet, fig. 31). 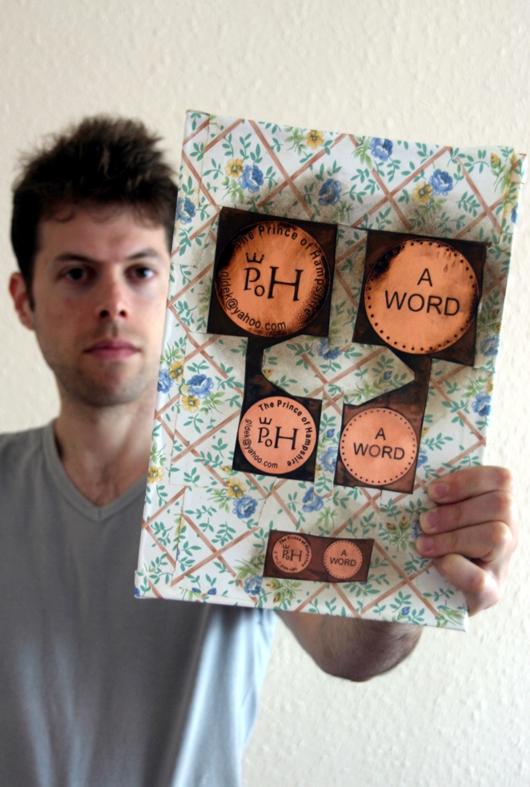 Words, in that imagined kingdom, symbolise the highest value that one can share – the authority of the speaker, his or her ‘own word’. As a token to this authority, I have decided to wear the prince’s costume while designing the coin on the computer (fig. 32). 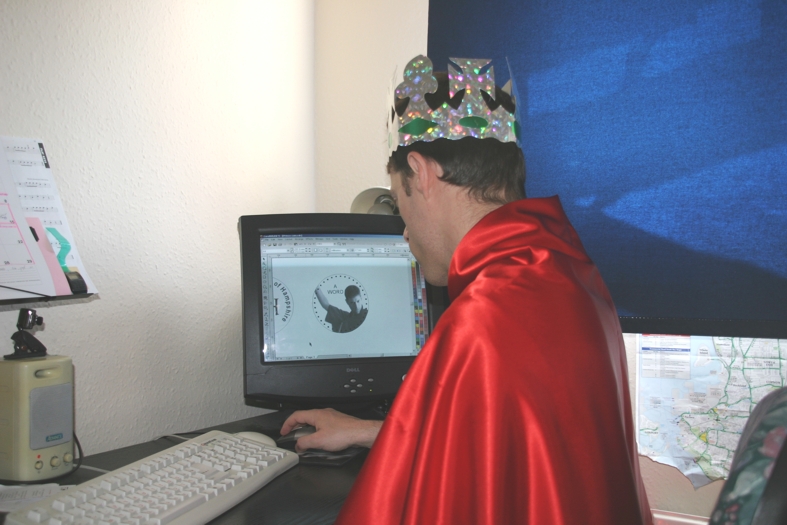 Figure 32: Design of Prince Coin on the computer, for The Prince of Hampshire (2006). Image © Gil Dekel.

For the making of the coin I have experimented, with help from others, with a stamping process using a mint (figs. 33-34), wax engraving for pouring lead (fig. 35), clay (fig. 36), silk screen and acid etching (figs. 37-39), and embossing on metal sheets (fig. 40). I also considered the simpler way of designing the DVD as a coin, as well as commissioning commercial companies to take a 3D scan and produce a die-cast coin (however, the quotes I received for this task amounted to more than £800 for producing a quantity of 300 coins). 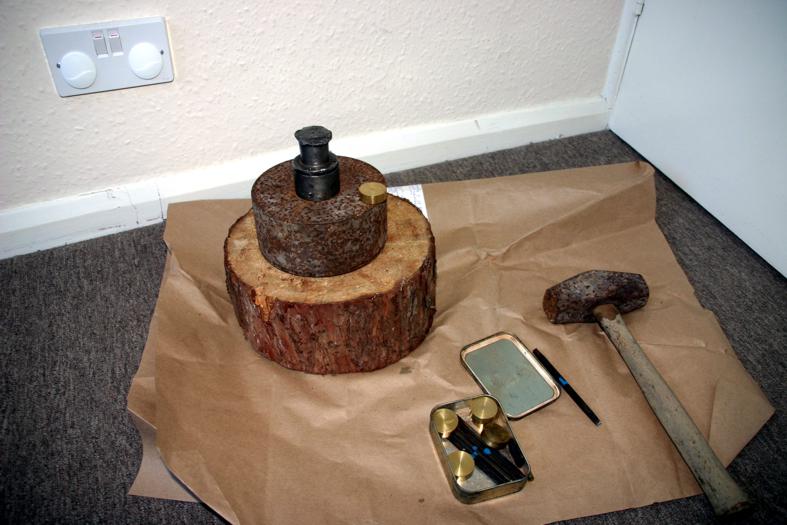 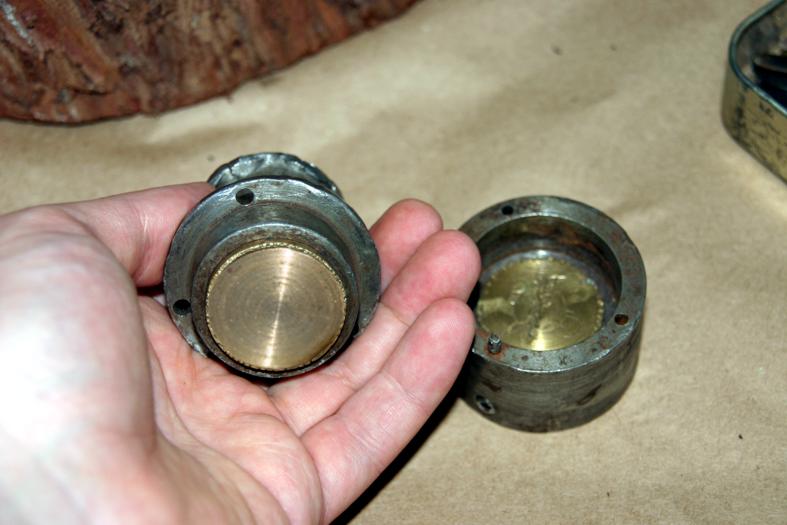 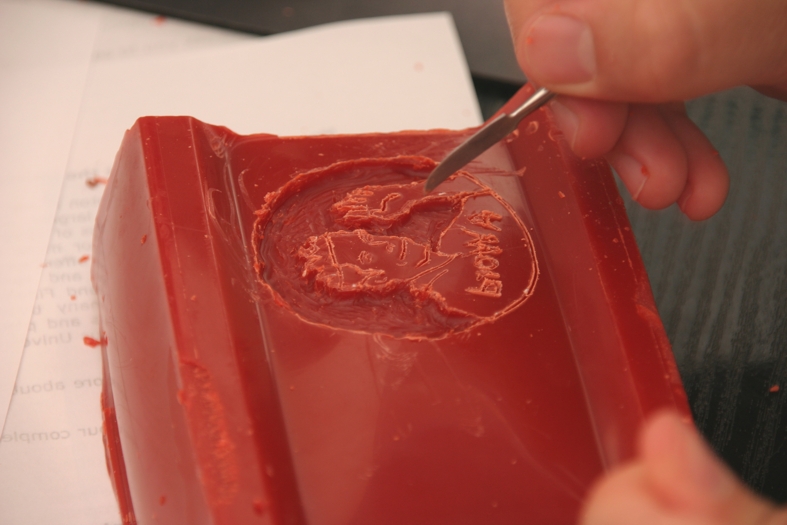 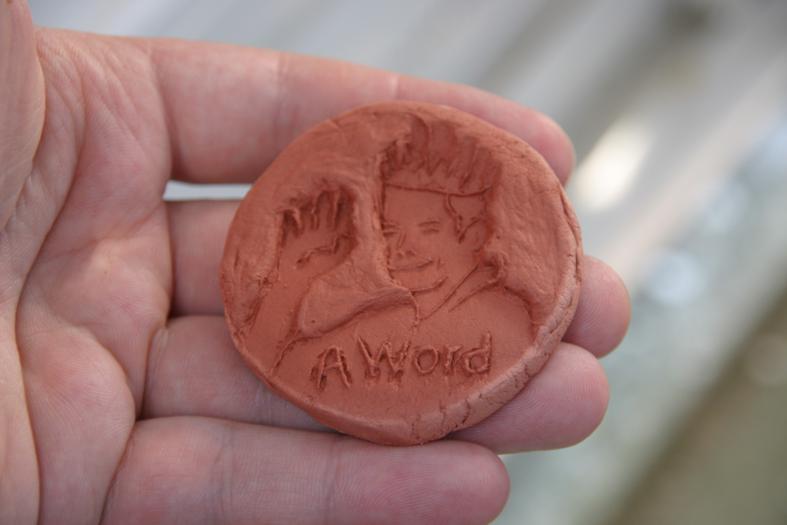 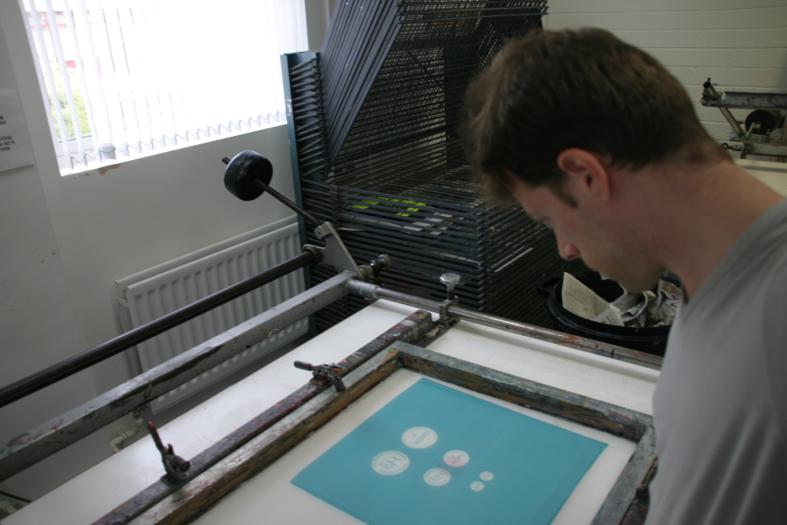 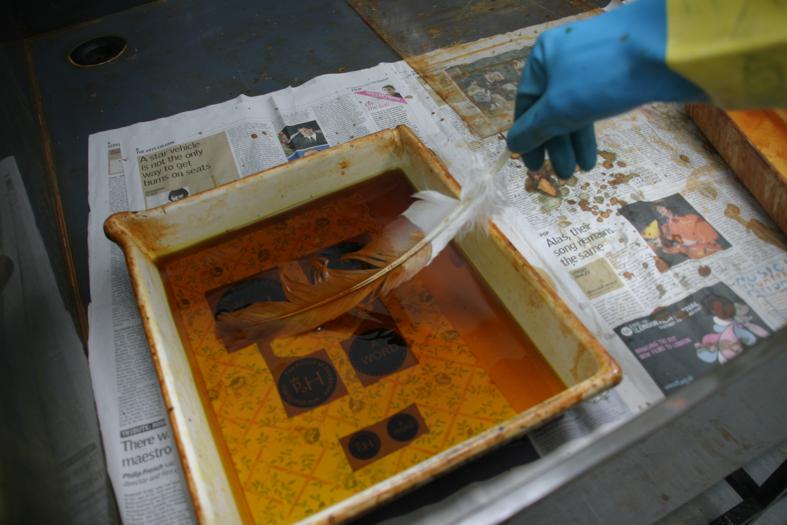 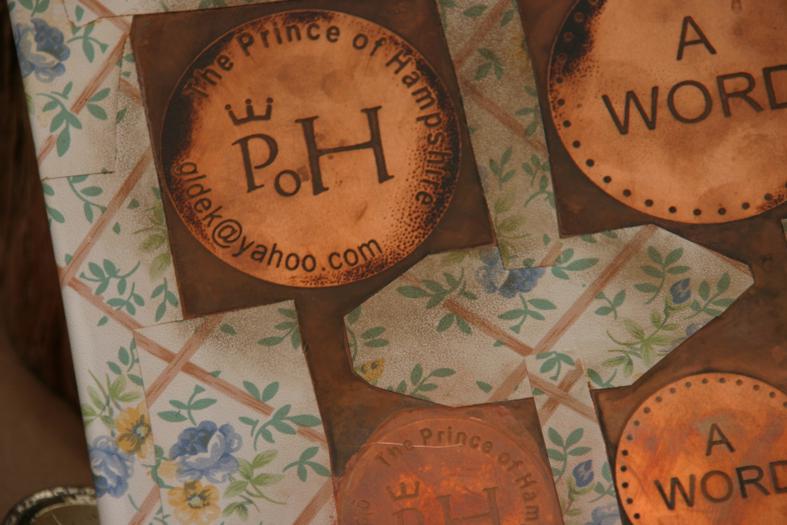 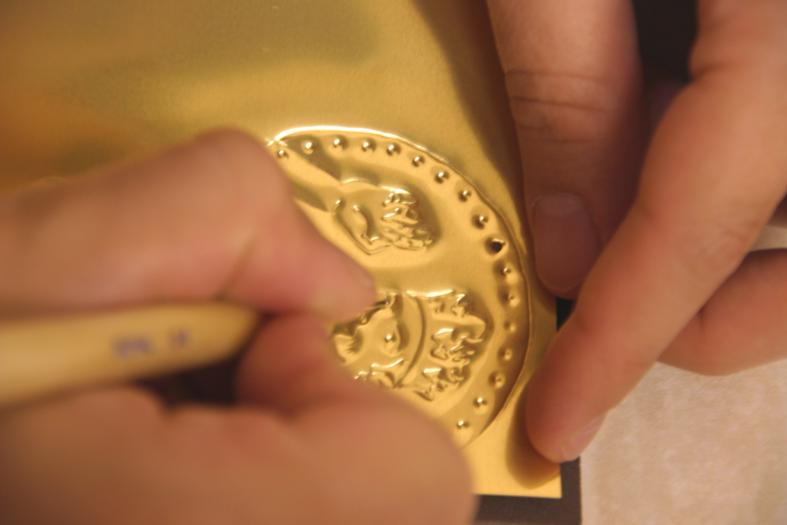 Figure 40: Embossing on metal sheets for the making of the Prince Coin, for The Prince of Hampshire (2006). Image © Gil Dekel.

For cost reasons the final coin was not made, however I was left with a few attempts that culminated in artefacts that are works-in-progress. These ‘half-completed’ objects can be seen as ‘open artefacts’ indicating in a few ways that one can follow how to make the coin. In that way, the possibilities become the artefact.